The oyster in the natural world: an object for cultivation and care

“Because we love the oyster, we cultivate it”. It takes 3 to 5 years of care and hard work to turn the spat into a commercial size oyster.

Expertise punctuated by the seasons

Working with oysters is dictated by the rhythm of the seasons and by the unique geography of the Arcachon Basin. Temperature, rain, sunshine, the inflow of fresh water, salinity levels, oceanic waters: there are so many different parameters that make the oyster beds in our tidal lagoon so rich. 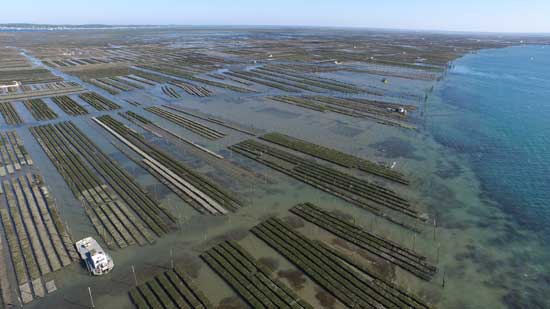 Preparing the collectors :  oyster farmers prepare the collectors, which will be placed in the sea during the summer to collect the spat. These collectors take different shapes and forms (cups, panels and tubes) but the traditional form used in the Arcachon Bay are limewashed tiles: these are tiles coated with a mixture of lime, sand and sawdust, which are then dried before being placed in “hives” on the oyster beds.

The use of bags : The spring and summer is when oysters grow. Because of the way in which they grow, the oysters begin to stick between the meshes of the bags. This phenomenon can result in them taking on specific forms. To prevent this from happening, the oyster farmers tap and turn the bags, in a process that is called turning. 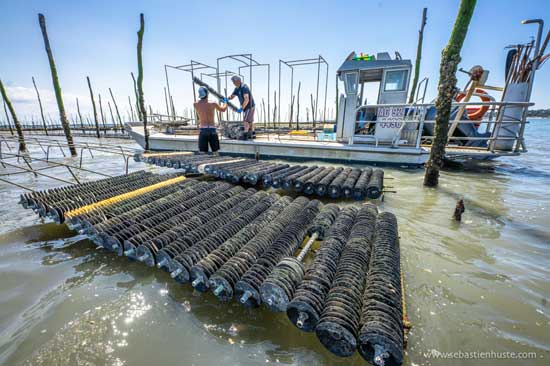 Reproduction time and installation of collectors : It is during the summer that the oysters ripen, the beginning of the reproduction process. The collectors that were prepared during the spring are stacked on tables at sea for the spat to attach to them.

The use of bags continues during the summer.

Doubling of bags : When the oysters begin to get cramped in their bags as a result of their growth, the oyster farmer will bring them back to his hut and split open the bags. The contents are then distributed into several bags that have a larger mesh size. The oysters are therefore less crowded and ready for a new growth spurt. 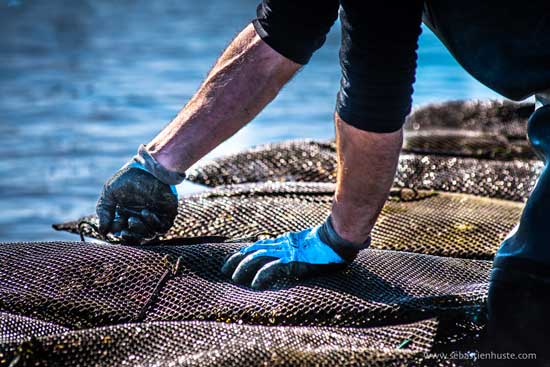 Work on the bags continues in the autumn (turning and splitting them).

Spat removal: From October onwards, we can start removing the spat (detaching the oysters from the collectors)

Sorting: Once they have been detached, the oysters are then sorted (or sifted) before being put in wire mesh bags before once again being taken out to the oyster farms where they begin to grow under the watchful eye of the ‘peasants of the sea’. 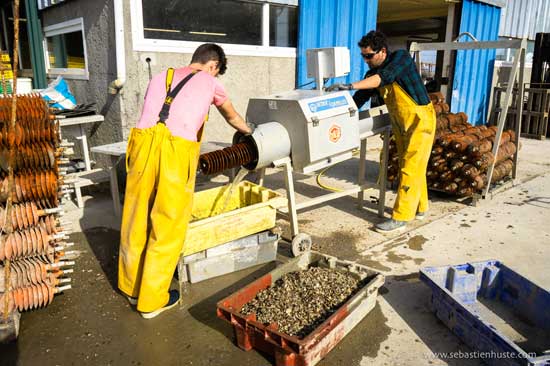 Preparing for the end of year celebrations : Oyster farmers will set aside enough oysters to get them to the size they need to meet the demands of Christmas and New Year.

Working on the spat : at the start of the year, the oyster farmers will once again work to move the oysters from the collectors to the bags by continuing to remove the spat. One by one, they then sort all the oysters they have harvested by their size. The spat then becomes a semi-farmed batch that will become integrated in the production cycle of the oyster farmer.

Screening : For oysters that are older than a year, the winter is good for screening. Those oysters that are more than 18 months old need to be sorted by size. That is why they are passed through the screening machine. Batches of different sizes are made up and divided into bags before being taken back to the farms. 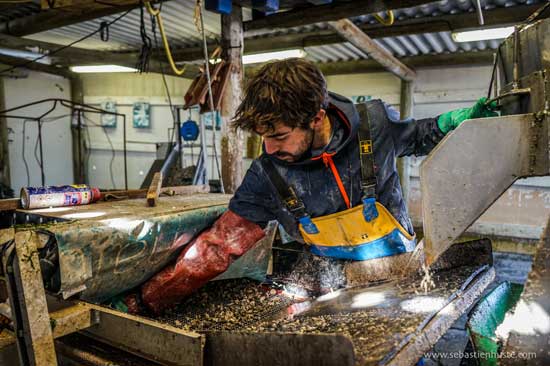 Maturing: last stage of the oyster production cycle allowing the oyster to acquire its colour and flavour.

Maturer : person who takes charge of the maturing process for the oysters

Creel : a basket for oysters

Hut : building (variable size) that is used as a shelter for oyster farming work that is carried out on land.

Tchanque (stilt) hut : a hut on stilts in the open sea, which provides a base for monitoring oyster farms

Yard : installations made up of a set of tables on which the collectors or the lockers are placed.

Lime washing : action of coating the tiles (collectors) with a mixture of sand and lime. This mixture makes it possible to detach the spat without running the risk of damaging it.

Channel : access route to a port or to an anchorage area where a vessel will have the greatest depth of water under the keel, allowing it to progress in complete safety.

Oyster ponds : basin or ponds where the oysters can get rid of any small impurities and to be stored before being sent to market.

Collector: this is an object that comes in different forms and shapes. It can take the form of a limewashed tile, a cup, or a tube submerged in water and used as a fixing support for the young oysters.

Concession plot: a plot in the public maritime domain entrusted to an oyster farmer for a limited period for an annual fee.

Crassistrea gigas : name given to the Japanese oyster farmed in the Bay since 1960.

Screening : sorting of the oysters.

Splitting : the act of taking some of the oysters from a bag and distributing them in other bags.

Half-raised: phase ranging from 12 to 24 months during which the spat is put in bags in the oyster beds.

Density : designates the number of oysters per bag.

Filigree : white, thin and fragile border of the shell of a growing oyster.

Detachment: From October onwards, we can start removing the spat (detaching the oysters from the collectors)

Diploid: refers to oysters caught in the open sea or born in a hatchery. They are characterised by a milt period.

Shell: the shell of the oyster.

Shucking : action of opening the shell of the oyster.

Scalding : action of passing them through hot water. Scalding is carried out on the oyster bags in order to clean them.

Estuary: designates a part of a watercourse which, subject to the tidal regime, is dry at low tide.

Foreshore: coastal area subjected to the action of breaking waves.

Gravette : name given to flat oysters before 1850.

Milt : produces the genitals on oysters.

High tidal range : the name given to the periods before and after the high tide. It returns every 14 days. The farms are then uncovered, allowing the oyster farmers to carry out their work. Or it can refer to a water purification basin.

Spat : juveniles of different molluscs, especially species that are the subject of marine cultures such as oysters – these are all called spat.

Cleaning : cleaning the oyster farms and beds involves removing abandoned equipment and wild oysters, as well as levelling the ground in order to ensure the operating conditions are as optimal as possible.

Channel : area between two pieces of land where the level of the sea is lower

Fishing tourism : activity carried out by an oyster farmer to introduce one or more tourists to their profession and working environment.

Pocket : the name for a plastic mesh bag for raised oyster farming. Different mesh sizes are used depending on the size of the oysters.

Hives : installation of limewashed tiles that are secured together with a rubber band.

Sélection : name for an oyster that has matured for at least 6 weeks in the Arcachon Bay.

Table : metal installation that provides support to the collectors or bags.

Tchanque : denotes the stakes that are driven into the sand or mud.

Marshes (Tatch in French) : area of muddy earth and grass that is revealed at low tide.

Tradition: name for an oyster that is born and raised in the Arcachon Bay.

Triploid or oyster of the four seasons: these are oysters that are obtained by cross cultivation of diploid female oysters (2n) and tetraploid males (4n = 40 chromosomes). The advantage of triploid oysters is that they do not produce genital products (or at least only in very small quantities).

Expulsion : action of turning over the oyster bags in order to rid them of impurities that would have stuck to them, and to detach the oyster shoots.

Eelgrass: sea grass or sea kelp, from the Zosteraceae family; it is an aquatic flowering plant that is found on sandy or sandy-muddy seabeds.