Experience my life as an oyster farmer

Experience the daily adventures of an oyster farmer as the tide comes in! This is an opportunity to enjoy a privileged experience, where you can discover the Basin, the people who work there, and their profession.

With the event taking place on a fishing barge (flat-bottomed boat), you will accompany an oyster farmer to one of his oyster farms, watch him go about his daily work and discover the different stages of the oyster farming cycle. Get truly involved with life at the heart of the Basin. You will discover its unique landscapes, from the large channels to the estuaries that meander through the mudflats, looking at the way in which mankind has shaped this territory. This voyage of discovery will last for as long as it takes for the tide to come in. The rising tide will soon cover the beds, leaving you time to wander through the pine trees, before reaching the port and the oyster shed to enjoy a well-deserved oyster tasting session.

Our ideas for walks

In the middle of the oyster sheds stands the Maison de l’Huître (The Oyster House), which is located at the port of Larros in Gujan-Mestras. With its fun setting and interactive scenography, visitors can walk through room after room, enjoying films and display cabinets, documents and objects all about oysters and oyster farming: discover the history and geography, techniques and materials used, as well as recipes and stories etc. 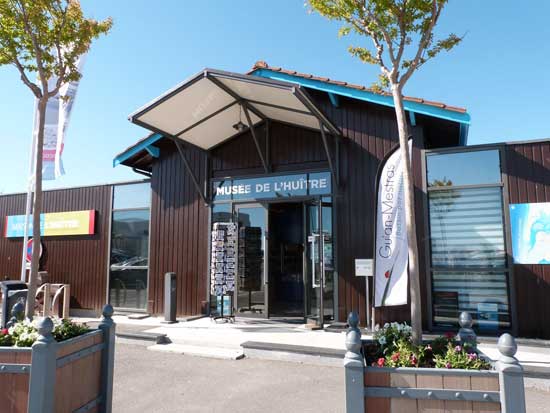 The oyster farmers of Arcachon Cap Ferret are pleased to welcome you to the simple happiness of discovering the oysters that they produce. In their hut – a working hub that is home to several stages of the breeding cycle – they put on tastings all year round in a friendly atmosphere. You can also partake in clams, shrimps, whelks or periwinkles. Delivered directly to visitors from the oyster beds, they undertake the shortest of journeys to guarantee real moments of pleasure. 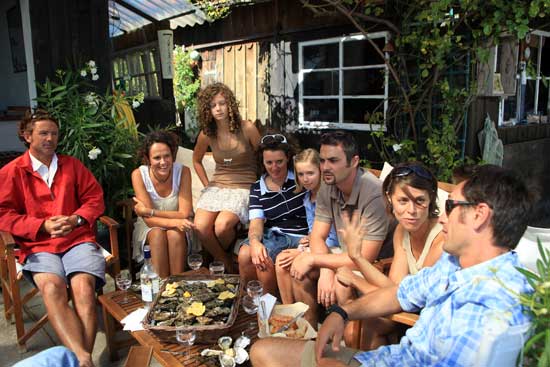 The Arcachon Basin is made up of 23 oyster ports and villages:
at low tide, the oyster-farming ports and villages are effectively stranded. This is why oyster farmers have to organise their work according to the cycle of the tides. The port areas in the south of the Basin were constructed in the middle of salt meadows in the 19th century and are connected to the major water routes by shallow estuaries.

To the north, and in particular along the Cap Ferret peninsula, the villages nestle in the hollow of a dune. A coastal path links the various ports and villages, allowing visitors to discover the natural and cultural heritage of the Arcachon Basin.

Andernos
The port of Andernos is home to all the maritime traditions of the Arcachon Basin, together with 44 oyster huts and its traditional flat-bottomed fishing smacks. The port is home to around thirty professional oyster farmers and around ten professional fisherman, who together have a fleet of around 70 boats.

Arès
A genuine working site, around thirty white cabins house the equipment necessary for the cultivation of oysters. This atypical site is made up of 2 docks (the equivalent to streets) and in the middle of them, you can find numerous piles of empty oysters, all in the process of drying. At the beginning of summer, the lime-washed tiles all add to the appealing aesthetic and the authenticity of the port. They are used for collecting shellfish from the farms. The only boats used are”flat” boats or “barges”, which are used on the tides by the oyster farmers.

Audenge
The port was built in 1894. Upstream of this port stands a large water reserve built to help precent silting. Today and for many years now, this large bay, called a “sluice dock”, can be filled by opening the lock at low tide – in fine weather, it is the perfect place for a swim. During the summer season, the water is refreshed by means of a pumping system. This method ensures the provision of good quality bathing water, which is subject to regular checks by the SIBA Hygiene Service.

Cassy
A small typical port to the east of the Arcachon Basin. A dozen oyster farmers have establisihed themselves in the port in the town of Taussat.

Claouey
This is the start of the peninsula for this port in the North Basin. The equipment and huts stand next to each other along the bank. A warm welcome awaits visitors at the huts. The swimming club and Bertic beach make it a popular site among locals.

Grand Piquey
Situated around the pier are various huts facing Bird Island, as if they are watching over the oyster farming going on in the Basin.

Gujan
This port was established a long time ago on the banks of the Gujan stream, which flows into the Estey de Larros. In 1883, improvement works were carried out, resulting in the dock being constructed. The earth that was removed during the excavation was used to create strips of land that are now home to lots of huts used for oyster farming. Established at this port in 1843, the Bains Gujanais establishment has been very successful for nearly 70 years. The huts at the time were accessed by a 450 m long walkway. The port which was called “footbridge port” therefore takes its name from this famous establishment. The port of Gujan was also a very active sardine port with several canneries.

AiguillonThe village of Aiguillon opens onto a small cove that links together the bright lights of the town and the port of Arcachon. Sheltered from the prevailing winds, it stretches from the tip of Aiguillon to the Lapin Blanc [White Rabbit] Cove, still offering a certain charm.

Herbe
The village of Herbe is particularly picturesque. The tangled web of alleys allows your gaze to wander through to the stretch of water around each hut.

La Barbotière
In 1925, when the site was occupied by ten fishermen’s huts, Jean PARSON built a shelter for “cold water bathing enthusiasts”. The establishment, which was given the name “La Barbotière”, quickly became a great success and a place of celebration complete with a dance hall and refreshment bar. In 1934, the inn closed, but the name of “Barbotière” remains to this day, still lending its name to the port, which previously was called “Port de Mestras”. Equipped with modern oyster farming complexes, the activity that goes on at the port of La Barbotière is very important. The Lycée de la Mer, built in 1991, is a training centre for numerous young people who go there every year to learn all about maine professionsm, and shellfish farming in particular.

La Hume
Fed by the Landes canal, which flows into the Estuary of La Hume, the port of La Hume was home to a few sailors’ huts in the second half of the 19th century. The transformations at the port resulted in the creation in 1959 of a central strip of land, upon which 27 oyster farms were established, as well as a dock that became the current marina in 1984-85.
Today, the port of La Hume, with its beautiful and large beach bordered by tamarisk trees nearby, is a popular holiday resort and the perfect harmonious setting for a walk.

Teste-de-Buch
The port was commissioned by the local people in 1789 and dug in 1840. Since 1884, the port of La Teste has been one of the most important oyster farming complexes in the Arcachon Bay. To the east of the port, there is a very narrow lock, through which some of the oyster farmers must skilfully navigage in order to reach their beds – it is a lovely original feature of the oyster port of La Teste. Its specific shape and central island make it one of the most unique ports in the Basin.

Larros
In 1883 and 1884, a 110 m long dock was dug and a strip of land was constructed. The internal embankment was extended by a jetty that ended at the Croix des Marins, which was erected in 1891.
Several canneries were established in the vicinity of the ports of Gujan. Sardine production is in the process of migrating to Spain and Morocco, meaning that the factories are gradually closing. The port of Larros is also a recognised shipbuilding site. Fourton, Dubourdieu, Pradère, Lapeyre… all kinds of boats come out of these sites: flat-bottomed oyster boats, sardine fishing boats, pinassottes, etc. The Maison de l’Huître, along with tasting sessions at the oyster huts and the port of Larros mean that this site very popular with locals and visitors alike.

The Canal
This port was originally dug by the Compagnie Ouvrière de Colonisation des Landes de Gascogne, in order that a dyke could be constructed in approximately 1850 to lead the Mestras bathhouse. 10 metres wide, it had a structure similar to a canal, from which is gets its name. With the development of fishing and oyster farming, it was transformed into a port, with the construction of a dock as well as a sluice dock, thereby allowing the permanent flow of water and avoiding siltation. A second port in the western area, at the same time as the creation of a significant oyster complex, allowed oyster farmers to be able to market their product in complete safety.

The Canon
Unlike most oyster-farming villages in the Arcachon Basin, Canon was not built following the natural contours of the coast. It was actually built during the 19th century on embankments that had been slowly built up by oyster farmers who, until then, had found themselves “stuck” between the high dunes and the waters of the Basin. As a result, the small bay – which once extended to the foot of the dunes – has been practically filled in.

The FerretAlmost at the very end of this strip, you will find the last huts before the Point. Located between the Lighthouse and the village of Cap Ferret, the site is sheltered from the Basin by the small bay of Mimbeau.

Le Four
Le Four is a relatively private oyster-farming village on the Cap Ferret peninsula, away from the main navigation and traffic routes.

Rocher
The port of Rocher in the town of La Teste-de-Buch brings together more than a dozen professional oyster farmers in this town, which is so typical of Arcachon oyster farming. It is a recent port, and was built at the end of the 20th century.

Les Jacquets
Modest in size, the Jacquets oyster port is both picturesque and welcoming. It has actually been included on the list of classified sites.

Meyran
Established on the edge of the Meyran estuary, the site was a beaching port for many years and didn’t undergo any further development. Dedicated to fishing and oyster farming, the port of Meyran served as a terminus for the Decauville railway line between 1919 and 1935; mining pit props and resin from the Landes forest were transported through the area, in which the Arcachon Basin occupies a central position. The props were then loaded on to barges pulled by two tugs that rotated with the cargo ships off Arcachon, bound for England. The digging and enlargement works, which took place from 1959, made it possible to create 4 platforms, which were then occupied by oyster establishments.

Petit PiqueyLocated very close to the Pointe aux chevaux, this small oyster village is opposite the Ile aux Oiseaux. It is arranged around a cove where traditional life continues.

Piraillan
This port is located near the Piraillan market and the former fish stock tanks. It is the home to some busy oyster farming, which continues all year round. A dozen professionals are established in this place, which is much loved by the inhabitants of Arcachon Bay.

Taussat
The port of Taussat to the east of the Bay is an intimate place, located a little away from the hustle and bustle – it is also home to a sailing club and a beach that is popular with locals.